The “Thank You for Showing Up” Recognition Series is the Women & Girls Fund’s effort to share stories of local people who go beyond saying “What can I do for you?” to offer simple acts of kindness to help someone in need. “Showing up” is about seeing a need and taking action. Such supportive gestures of caring and generosity of spirit are all around us in the Mid-Shore and make our communities stronger. 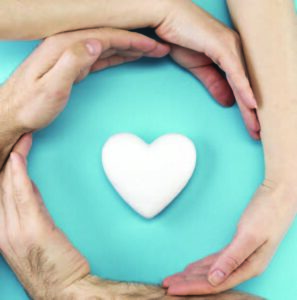 This story will leave out the names of the heroes to protect their privacy, which is important to their family.

My sister used to live on Washington Street in downtown Easton. She had wonderful neighbors who were immigrants to our country and our town, and who continue to be hard-working business owners in our community. At least three generations of their family lived next door to my sister. Their children played with my nephews and interacted with my sister and her beau, but otherwise the family kept a somewhat formal, private, and respectful distance.

After my sister tragically lost her significant other, the father and stepdad of my nephews, in a terrible car accident, many people came with flowers or food to offer their condolences. But my sister’s neighbors did something so quietly discreet, kind, supportive, and thoughtful that we have never forgotten it. When they discovered what had happened, they brought a large cooler filled with ice and drinks and left it on the back stoop, and then refreshed it daily, until after several weeks she finally said that they could stop. She never saw them come or go, but the cooler was there always filled and ready to offer refreshments to the many people who passed through her doors to support her at that difficult time.

Later, when my sister was then a single mom, and had contracted breast cancer, she decided to sell her car. The car was old and not in great shape. Several people responded to the ad for the car for sale, but one man in particular kept showing up trying to buy the car. His behavior became odd and concerning, which, we later learned, was being observed by the same neighbors who had supplied the coolers of drinks. Sure enough, the patriarch of the neighbor’s family knocked on the door one afternoon and tried to buy the car himself. He didn’t need a car, and it became clear at once that he was trying to buy it to make the unsavory person go away in order to protect my sister.

My sister’s neighbors did a wonderful thing for her on these two occasions and others. They looked out for her, and quietly stepped in when they felt they could lend a hand. Despite a language barrier, cultural differences, and a property line, they treated her like family. Their actions weren’t empty gestures but acts of constructive support that improved her life; they communicated to her that she wasn’t alone. What a gift!

“Small gestures touch the heart and warm the soul.”