Cheryl Hughes, a Talbot County native and longtime Dorchester County resident, is a multi-faceted woman.  She has been married to Alfred Hughes for 25 years, is the mother of two, daughter Ashley and son Bradley, and grandmother of three, Leighton, Sloan, and Beckett.  She is a down-to-earth businesswoman—she and Alfred are the owners of Ferry Point Marina on the Choptank River.  She is a busy, happy woman of immense warmth and expansive compassion for others.  And, she is a 5-year breast cancer survivor.

Since 2011, Cheryl has spearheaded “Saving Second Base”, a grassroots effort that has raised more than $350,000 for cancer organizations.  That’s the year she and 3 good friends received cancer diagnoses launching her into an unexpected calling to raise awareness and money for breast cancer concerns.  Cheryl’s story demonstrates the power of pooled resources and, in keeping with the late Sheryl Kerr’s focus, shows what can happen when women are empowered to act.

At her daughter’s suggestion, Cheryl and her 3 friends – “Team Wonder Women” – organized a successful breast cancer walk.  Next, Team Wonder Women hosted a concert at Sailwinds Park that drew over 900 people.  An important thing began to happen … Cheryl’s already substantial circle of friends grew as she met more and more women affected by cancer who felt the same way and wanted to help others.  Team Wonder Women grew and grew.

Cheryl’s motto – “it’s got to be good or don’t do it” – really paid off when Team Wonder Women presented a full day of country music, also at Sailwinds, that brought out more than 2,500 people.   Since then, they’ve given dances with silent auctions and a masquerade ball.  The group’s mission and momentum continues.  According to a friend, “Cheryl has accomplished something amazing: with quiet resolve, she successfully tapped into the community to support “Saving Second Base” more successfully than many of the more established agencies.”

The funds raised by “Saving Second Base” have been donated to the American Cancer Society and UM Shore Regional Health Clark Comprehensive Breast Center among other cancer-related agencies.  Contributions have also been made on behalf of cancer patients needing assistance who are undergoing treatments—from hotel rooms for family hospital stays to house repairs.

Cheryl observed, “having cancer raises awareness of the full picture of need and the hard times people are going through.”  Now, in addition to supporting cancer patients and their families through large fundraisers, she’s become something of a “Help Desk”, offering resource suggestions and moral support.  It’s clear her passion, enthusiasm, and positive attitude draw people to her, and, in turn, she empowers others to reach out and help however they can.

Therefore, it is our honor to present Cheryl Hughes with the 2017 Sheryl V. Kerr Award. 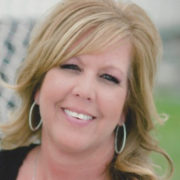