While most of us know where we were born, Ellen Rajacich says, simply, that she was “born abroad” and “born independent.”   Her approach to life has been to enter doors that opened to her, which resulted in a life full beyond measure.

The daughter of a career foreign service officer, Ellen and her two brothers grew up in far-flung posts around the world.  She says she usually didn’t like the schools she attended along the way, but delights that the family’s moves from country to country and continent to continent gave her a great education.

Ellen says that one of the smartest things she’s ever done was to leave Miami University after her sophomore year and join a longtime friend at the Johns Hopkins School of Nursing.  For the first time in her life, she adored school.  She loved anatomy and exercise physiology, and—even more importantly—she fell in love with and married a Public Health School graduate student named Nick Rajacich.

The young couple arrived in Easton that summer, and though Ellen had intended to continue her career as a nurse, Nick told her that she couldn’t work for him.  That’s when she decided on a career as a volunteer which, she says, “seemed like a good thing to do.”

Ellen and Nick raised three wonderful children, Nicholas, Michael and Lynn, and Ellen—always active—took up tennis, sailing and gardening along with volunteer work.   An excellent athlete, she served on boards of directors over the years, but she’s happiest when she donates her time in more active ways.

Now in her 80s, Ellen says she has taught a wide variety of classes at the Talbot County YMCA —now the YMCA of the Chesapeake—from sewing, cooking, and tennis to every type of exercise and aerobics over the past 50-plus years!

Nick died in 1989, and Ellen has been on her own since then, but she’s never slowed down.  She continues to manage her household, mows the grass, crews on her son Michael’s sailboat, and remains active in the Talbot County Garden Club and other community groups.  But if you’re looking for her at the Y, you might find her leading weekly Deep Water Aerobics and Aqua Aerobics class in one of the pools.

Friends say that Ellen is the most matter of fact person they’ve ever met.  They say she’s made from equal parts of energy, inquisitiveness, and determination.  In her understated way, she has motivated countless girls and women (and many men too) to care for their health and wellness along with the importance of developing friendships and community.  She has set that standard herself, and her leadership, caring, dedication, and generosity of time and talent has made a significant difference in our community.  And, so it is with pleasure, the Women & Girls Fund names Ellen Rajacich the recipient of the 2017 Women & Girls Fund Award. 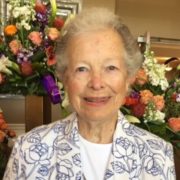