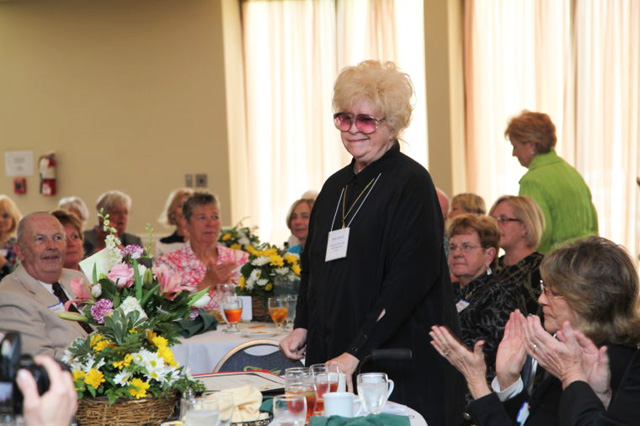 Originally from Ohio, Mautz moved to St. Michaels with her family in 1970. From then on she immersed herself in the community as she became the owner of Carpenter Street Saloon said Alice Ryan, founder of the Women and Girls Fund, as she introduced Mautz at the April 27 luncheon. “We want to honor you not only as a business leader, but as a wonderful volunteer and a real inspiration to all of us,” Ryan said. “It really is a great privilege and honor to thank a woman who has been such an inspiration in our community.”

Mautz was a leader in forming the St. Michaels business association, but it was her work with other community organizations and attitude of “never, never, never giving up” that was talked about most at the luncheon.

Ryan spoke on how Mautz was integral in organizing youth sailing programs at Miles River and Tred Avon yacht clubs, as well as the Chesapeake Bay Maritime Museum, and being active with Red Cross, the Waterfowl Festival, Critchlow Adkins Children’s Center, and the St. Michaels and Tilghman volunteer fire departments — she is an honorary member of both. Also there to honor Mautz: a representative from the office of U.S. Rep. Andy Harris, R-Md.-1st; Sen. Addie Eckardt, R-37-Mid-Shore; Del. Chris Adams, R-37B-Wicomico; and her own son, Del. Johnny Mautz, R-37B-Talbot.

“I can’t tell you how proud I am to stand here and tell everybody this is my number one hero. Thank you mom,” said Johnny Mautz after awarding her an official congratulatory citation from the Maryland House
of Delegates.

“I am honored to receive this award. If I ever saw something that needed to be done, I just did it,” Diana Mautz said. She challenged those in the audience to do the same and help those around them.
Since 2003, the Women and Girls Fund has awarded $418,337 to 70 Mid-Shore nonprofits to support their mission statement of “using the power of pooled resources to improve the lives of women and girls on
the Mid-Shore.”

“The staff and volunteers of the agencies the fund supports are true heroes,” said Beth Spurry, past president of the Women and Girls Fund who co-chairs the fund’s grants committee. “These people give their time and talent to help meet the growing and changing needs in our community. We are pleased to put donors and grant recipients together at the annual luncheon so they can see their dollars are going to real people who are doing great things for women, girls, and families throughout the Mid-Shore.”

The Women & Girls Fund of the Mid-Shore
provides grants to non-profit organizations each year for programs addressing unmet or underserved needs of women and girls in Caroline, Dorchester, Kent, Queen Anne’s, and Talbot counties in Maryland.
Created in 2002 as a grass roots effort of a small group of women looking for an effective way to address significant local problems, the Fund has grown to include more than 750 donors who have, as of June 1st, 2013 created a permanent endowment of over $650,000.